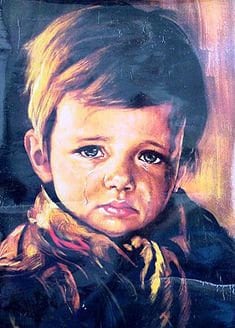 The stories about the painting of the crying boy began around 1985, when several mysterious fires occurred all around England. Mysteriously, after all the debris was cleared, the only item that remained un-charred was the painting of the Crying Boy. A Yorkshire fireman was so distraught by the occurrences that he told the story to a newspaper in England. There were at that time more than one of these paintings around and each seemed to have the same effect. Perhaps copies of the painting also transferred the curse as well. The Sun newspaper began receiving telephone calls from people all over the area that had similar stories to tell about the crying boy painting. One person that contacted the newspaper was Dora Mann of Mitcham and she has been quoted as saying “Only six months after I had bought the picture, my house was completely gutted by fire. All my paintings were destroyed, except the one of the crying boy.” After one month of hearing all the tales, the Sun newspaper gave their readers the chance to bring their crying boy paintings and have a large bonfire to destroy them. All the paintings that were brought to the event were burned. No one knows for sure where the painting originated from or who the artist might be, but it can’t be just a coincidence that 40-50 similar cases occurred in the same time period. The picture itself was a portrait painted by a Spanish artist of an orphan that was mass produced in the UK with several thousand in circulation. It is said that the artist’s studio burnt to the ground, and the boy was later killed in a car crash. It is said that the curse will only effect someone if the owner of the painting becomes aware of it. Some psychics have claimed that the painting is Haunted by the spirit of the boy it depicts.